Another Jewel to Cheer Me Up

I glance at the bird feeders this afternoon and amongst the greens and golds of the usual species sat a vision in pink.  A gorgeous full breeding plumage Lesser Redpoll feeding on the niger seed.
Posted by Derek Moore at 14:47 No comments:

Joy in the Fog

The weather today is as miserable as it can possibly get.  Steady rain, thick fog and nil visibility.  Even so driving out of village on the way to the Doctor this morning the first Snowdrops were beginning to appear bringing some Joy to an otherwise awful day.
Posted by Derek Moore at 08:38 1 comment:

I have been laid low with illness this past week or so.  The only birds I have seen have been through the windows with the feeders attracting a lot of activity.  What really cheers me up is when the Siskins begin to come back and the last few days they have been there with the males looking wonderfully green, black and yellow.

Goldfinches are also back in numbers in equally gorgeous plumage but if the land beside a Siskin boy the colours do clash.


We have also had both Marsh and Willow Tits this week just to keep us alert.

My friends Ken & Judy Marlow sent me some amazing pictures this week.  With our Big Garden Birdwatch coming up and nonsense of the threat of White-tailed Eagles in Scotland I thought I would share them with you.

The Marlows live in a fishing and birding lodge on the shores of the Kenai river.  Granddaughters insist they trim up a tree each yuletide complete with lights and attach food for birds including suet.  It is the latter which attracts the star bird.  If you think that Moose and Caribou are also wintering in the yard then the view from the windows must be exhilarating.

﻿﻿﻿﻿﻿ Whatever you see this week I hope it equals this spectacle.
Posted by Derek Moore at 01:54 No comments:

I am organising a trip May 24th to June 2nd to Bulgaria and Northern Greece.  The visit is planned with an emphasis on seeing many birds but also getting plenty of photographs as well.  The trip is also planned for a maximum of 6 people and we need just 2 more to complete the number.

If anybody is interested I would be glad to forward an itinerary and costs by return.
Posted by Derek Moore at 03:56 1 comment:

There have been reports of Bramblings at Penlan Park so I began there.  My second effort and still no luck.  Maybe I am looking in the wrong place.

I pressed on and parked near the entrance to the boardwalk in Dinefwr Park.  Immediately I was aware of a pair of Ravens "kronking" loudly overhead and then 3 splendid Red Kites soared overhead. I walked on through the boardwalk but found little of interest until I almost reached the mill pond.  A pair of Green Woodpeckers appeared and called noisily.  This species is becoming uncommon in this part of Wales.

I walked round to the hide in Castle Woods and scanned Dinefwr Ponds.  Immediately I picked up a Great White Egret standing motionless by the furthest pool.  I know one of this species was seen here before Christmas but this is the first time I have seen this increasing species here.  Sadly it was too far away for a photograph. There were also 110 Wigeon, 40 Mallard, 40 Teal, 11 Gadwall, 2 Shoveler, Pintail and 44 Coot.  On my way back home a Sparrowhawk dashed across the road at Peny Banc.
Posted by Derek Moore at 07:16 No comments: 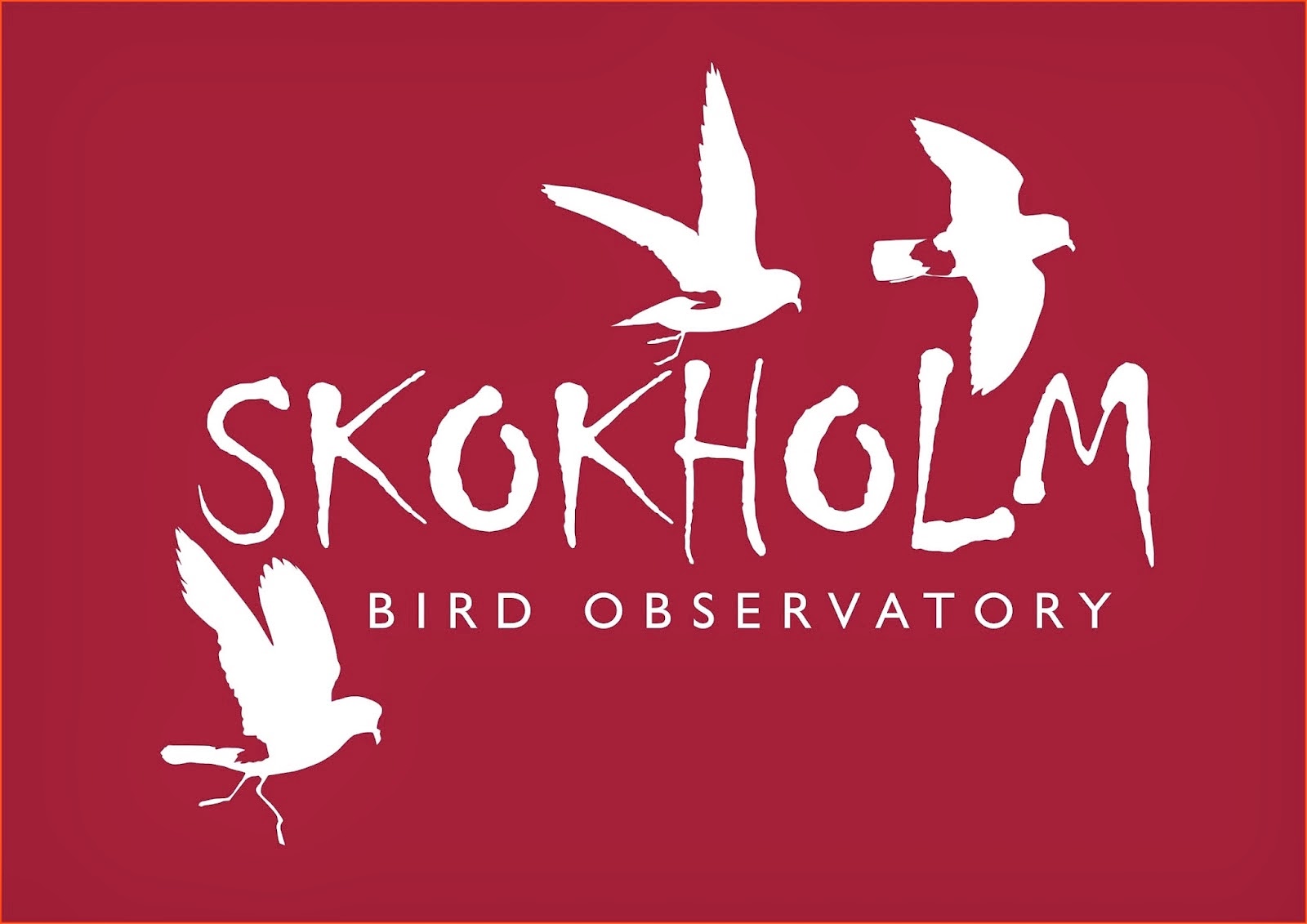 Skokholm was Britain's very first Bird Observatory but then lost that status when ringing ceased due to new ownership of the island.  Since Skokholm was bought recently by The Wildlife Trust of South & West Wales a great band of volunteers have worked hard to reinstate the facilities on the island so long term study of the migration of birds can begin again.

They have been very successful and have now once again been awarded Bird Observatory status.  Congratulations to everyone involved in putting Skokholm back where it belongs.
Posted by Derek Moore at 00:34 No comments:

Until today I had never seen the North American race of Iceland Gull so we headed for Newgale to catch up with a Kumlien's Gull.  The weather was amazing - bright sunshine and no clouds at all.  It brought out crowds walking on the beach, kyaking and just a few birders.  Richard Stonier kindly pointed out the Kumlien's as we pitched up beside him.  Looking through the telescope one could clearly see the dark smudge and the greyish spots on the primaries.

We also noted an adult Glaucous Gull and an adult Mediterranean Gull.  It was also difficult to ignore the hordes of Kittiwakes feeding in the surf and at times dropping to the beach really close up.


We stepped across the road to check out more gulls on the pools behind the pub and enjoyed excellent views of a juvenile Glaucous Gull.  We then moved on to Broad Haven where scanning the bay there we c50 Common Scoters, 7 Red-throated Divers, Great Northern Diver, 5 Fulmars, Shag, Guillemot and on the cliffs a fine male Stonechat.

Before returning home we stopped at Cilsan Bridge in the Tywi Valley and counted 40 Whooper Swans the largest number I have seen at this site in 12 years of watching.

Checking The Coast After The Storms

The weather improved enough today for me to check out a couple of places after the recent storms.  I tried to get down to Cefyn Sidan but three JCBs were in action repairing the path to the beach so instead I started at Pembrey Harbour.  Walking out to the quay there was a male Red-breasted Merganser in the harbour and 40 Ringed Plovers roosting on the sand as high tide was imminent.  Plenty of Oystercatchers too but little else.

I made a quick stop at Ffrwd Farm Mere but only heard a Cetti's Warbler sing.  I finished at Kidwelly Quay where 7 Red-breasted Mergansers including 2 males were close to the quay.  There were at least 300 Lapwings and 50 Dunlin together with a single Little Egret and a Kingfisher.  On my drive home a Peregrine flew across the road at Abergwili.
Posted by Derek Moore at 14:38 No comments:

Reasonable weather meant we got to Slimbridge today.  Occasional showers meant we could dodge the rain and spend some time in hides keeping dry.  There were hordes of birds which no doubt had been blown in by the floods and rain.  At least a hundred Bewick's Swans were obvious and 160 Barnacle Geese.  We could not find the White-fronted Geese seen early on the reserve.  There were large numbers of Shoveler, Pintail, Teal and Wigeon on the grassland with at least 4,000 Golden Plovers and 800 Lapwings.  Looking carefully you could pick out Black-tailed Godwits amongst larger numbers of Curlews.

In the Holden Hide there were more big numbers of birds and thanks to a kind fellow birder I was shown a single Little Stint out on the Dumbles with a flock of Dunlin.  Beryl picked out a Ruddy Shelduck too but this may well have escaped from the collection. At the Zeiss Hide we noted 4 Avocets and a solitary Crane (one of the Crane Project birds).  Later we saw another elsewhere on the reserve.  Good to be out amongst so many birds.
Posted by Derek Moore at 09:21 No comments:

Out In The Floods

With a hint of sunshine between the showers we ventured out first to Cilsan Bridge.  It was obvious that the Tywi had breached its banks with water all over the valley grassland and the road in places.  34 Whooper Swans were crammed into the only grass still not covered and very close to the road.  There were also 50 Mute Swans about 100 Greylag Geese, 20 Mallard and a pair of Goosander on the flooded meadow.

We moved on to Kidwelly Quay where the sun was shining brightly.  Four wonderful Red-breasted Mergansers where in the channel and coming quite close allowing some photography.


The tide was half out so waders and wildfowl were quite apparent.  Lapwings numbered 350 but we could only see 20 Golden Plovers.  8 Greenshanks sat under the railway bridge and 2 Little grebes were in the channel. There were good numbers of the commoner waders with Redshank, Curlew and Dunlin.  We took a walk alongside The Kymer Canal and added a Sparrowhawk which disturbed a small flock of Linnets.  On the way back to the car Bullfinch and Long-tailed Tits were in the hedge.


We called in at Burry Port Harbour where 3 more Red-breasted Mergansers were in the channel and 33 Brent Geese fed by the tide line.  Masses of Oystercatchers could also be seen in the distance.  At Ashpits Pond a Cetti's Warbler sang twice.  By now the cloud had removed the sun so we headed for home for hot chocolate and a mince pie. 2014 species list now 60.
Posted by Derek Moore at 11:55 No comments: