Tomorrow see us beginning yet another trip to our place in France to enjoy the spring migration.  Reports from there will follow on this blog.

Not much around here today with heavy rain this morning.  Numbers of Goldfinches and Sikins building up on the niger feeders and our Willow Tits seem to be nesting somewhere close by. 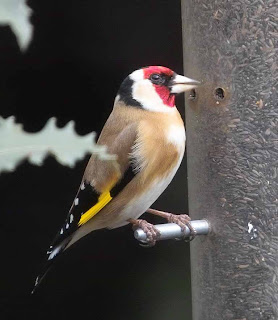 I see the Welsh Assembly have totally ignored the reasonable protests of all sane people and are pressing ahead with the cull of Badgers.  Still we have an election here on May 5th and hopefully the instigators of this cruel decision will be removed.
Posted by Derek Moore at 11:56 No comments:

Back again after a bit of an absence.  I have had to put up with a tear in the retina in my right eye and the last few days have been spent getting a day to be zapped by a laser.  Should be OK now. 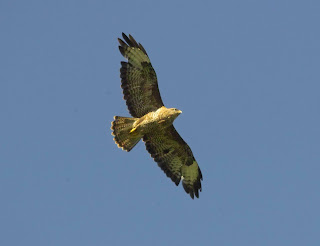 Today the skies above our house have been akin to the Battle of Britain.  Not planes but displaying birds.  First of all up to 6 Buzzards coming together and making a tremendous racket some of the males getting up high, and doing their dive-bombing display.

A couple of Red Kites appeared and made a more leisurely contribution before a Raven turned up to give the most demonstrative display of all.  He rolled and twisted in the sky all the time uttering his harsh cries. 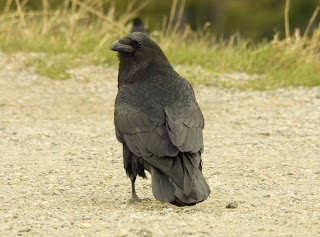 I also heard today that an Eagle Owl has been taking chickens in a village nearby.  At least two years ago I heard a male calling in our village.  Maybe we have a breeding pair somewhere in Carmarthenshire.
Posted by Derek Moore at 13:18 No comments:

I took a short walk up our lane in warm sunshine.  Chiffchaffs have arrived now and their singing could be heard incessantly all around. 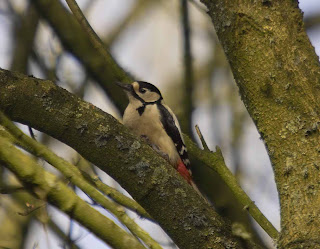 My attention was also drawn to the activities of Great Spotted Woodpeckers. Drumming was heard and also tapping on branches as well as lots of calling.  I estimated there were at least four birds involved all very active suggesting pairing and territorial behaviour was taking place.  A pair nests near the house every summer and the adults bring their young to the feeders after fledging.

More signs of spring and very welcome.
Posted by Derek Moore at 11:23 No comments:

I managed to get out today.  Of course my first visit was to Sandy Water Park to catch up with a Blue-winged Teal.  This North American wanderer was not obvious at first and I stopped to look at the juvenile Little Gull hawking like a marsh tern.  Finding Wendell and Malcolm was easy based on loud calls and size and these two quickly put me on to the duck.  The light was poor as it meant looking into the sun but it was not as bright as birds I have seen in midsummer in Canada so I reckon it is a first summer bird. 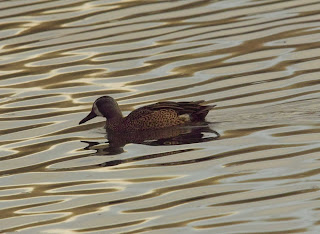 Even though news was negative from Penclacwydd and the Garganey seemed to have moved on I went there anyway.  A large roost of Black-tailed Godwits and Knot were impressive and walking round to Scott's Shed I heard plenty of Chiffchaffs and a Willow Tit singing.  A Mediterranean Gull sat amongst the hordes of Black-headed Gulls making it the second I saw there having had one fly across from the British Steel Hide. 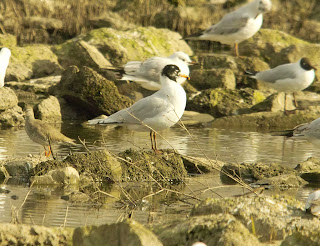 The temperature got up to 15 degrees today and I was very overdressed.  Long may this last.
Posted by Derek Moore at 14:49 No comments:

Badgers on the block again

My thoughts today have very much been with Badgers and particularly those to be found in North Pembrokeshire and South Ceredigion.  It is here that Elin Jones the Plaid Cymru Welsh Assembly Environment Minister has decided to carry out a cull of these delightful animals.  This decision has been taken against all scientific evidence and at a time when improved cattle management has greatly reduced the instances of TB in Wales.

A similar plan for 2010 was thrown out in court after legal action taken by The Badger Groups and supported by activists throughout Wales.

Despite all of this the decision to carry on can only then be described as political.  It would appear that this is a sop to the farming community from which this lady comes, to ensure she is voted in at the Assembly elections in May.

What she asking is horrendous.  Many of the best Badger setts are on nature reserves and these are not to be spared the slaughter.  This makes a mockery of them being purchased as safe places for fauna and flora.  Some sites actually receive revenue from organising Badger Watches which helps in the conservation of all wildlife.  Perhaps wildlife charities should ask the Assembly for compensation too. In all 1,000 Badgers could be killed. 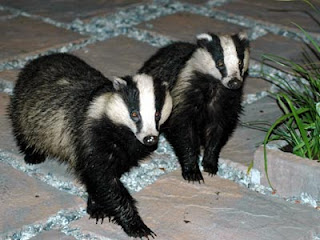 In addition some farmers who have Badgers but no TB in their herds are not anxious for a cull on their land.  Animals carrying the deadly virus might move in to fill the created vacuum.

In England a decision to consider Badger culling has been put on hold.  This was shortly after the public outcry at plans to sell off national forests.  The public response which caused the withdrawal of such a plan obviously caused Westminster ministers to reconsider any controversial plans for the environment.

What if 1,000 Badgers are killed with no significant improvement in TB in cattle?

The Welsh Assembly and Elin Jones seem to arrogantly ignore the cross section of public opinion in Wales.  Agriculture after all contributes far less to Welsh GDP than the environment generally so where is the sense. Perhaps Ms Jones will lose her seat in the May elections.  One can only hope.
Posted by Derek Moore at 08:57 No comments:

No Spring birds for me yet

I managed to get down to the Tywi Valley today and from Cilsan Bridge looked for newly arrived Sand Martins but to no avail. 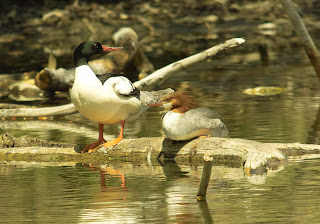 Scanning the swans I did find 3 Whoopers and on the river there was a pair of Goosander. 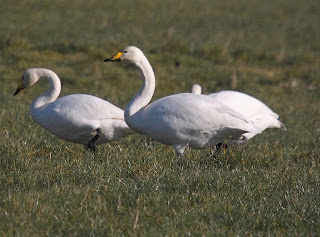 Further downriver at Dryslwyn there about 30 Whoopers with a single Bewick's Swan.  Still obvious signs of birds from the cold north which have not decided to return yet.
Posted by Derek Moore at 12:02 No comments:

I have heard that as you get older you can remember your childhood very clearly but not necessarily what you did yesterday.  What I do remember is reading the books of Rudyard Kipling.

Rikki Tikki Tavi is a mongoose.  To be exact he is a Grey Mongoose Herpestes edwardsii.  Who can forget his valiant battles with the venomous King Cobra ? 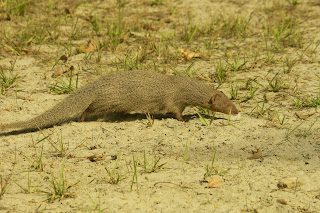 Recent sorties in India brought me face to face with Rikki for the first time.  He was quite approachable showing no fear of our jeep or the occupants.  His beligerence was such that you could imagine him taking us all on if he felt threatened.  He was so unconcerned that at one stage he just sat down and groomed himself in full view of my camera. 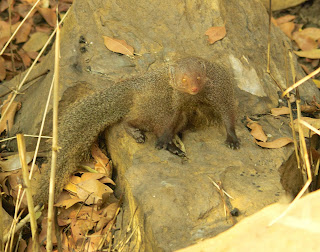 I guess those early Kipling books and Jim Corbett's stories always excited me about India.  It seems daft that I have left it unil the last 12 months to visit that amazing country.
Posted by Derek Moore at 08:44 No comments:

Which came first? Chicken or Junglefowl?

Sorry I am still reflecting on my India trip.

We were seeing a lot of Red Junglefowl in the Sunderbans and we did get a glimpse or two of Grey Junglefowl in Tadoba National Park. 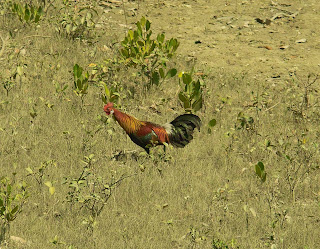 It is worth reflecting that all domestic chickens whatever they look like must have originated from these wild birds.  I noted that the cock's crow was Cock-a-doodle and the "doo" was missing. The adding of the latter note must have come later with domestication. 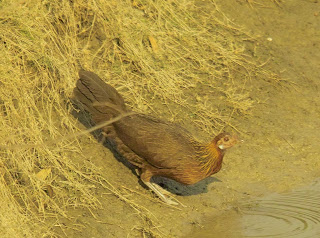 It is really surreal to see chickens suddenly take off and fly rapidly like pheasants from one side of a river to the other.  I have always been fond of chickens and I will look at them in a new light after becoming familiar with their wild ancestors.
Posted by Derek Moore at 08:22 No comments:

A great day with bright sunshine.  Spring is certainly on the way with primroses appearing everywhere.

Took a walk up the lane but only three Snipe flushed from a wet meadow worth noting. 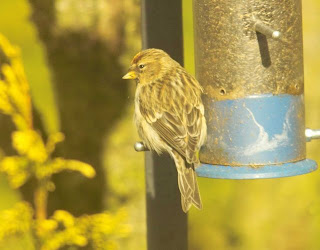 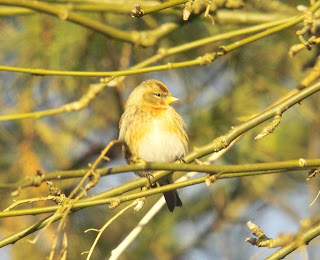 Back home in the garden a lovely Lesser Redpoll visited the feeders.
Posted by Derek Moore at 10:47 No comments:

First of all all my photographs are now safe thanks to my good friend Barry Stewart who worked until midnight last Friday to rescue them. 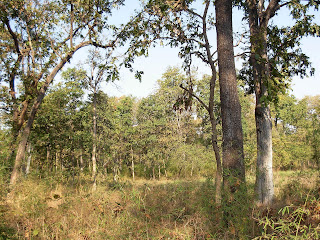 Apart from the cricket we visited two main birding areas.  Firstly to the Tadoba National Park 3 hours south-west of Nagpur,.  This area of deep forest is home to many Tigers of which we saw two and a large herd of Gaur.  We were also lucky to see Sloth Bear as well.  For birds the forest was difficult with the jeeps roaring about hell bent on seeing Tigers.  We did get some reasonable views of Grey Junglefowl and Red Spurfowl but birding was easier in the surrounding farmland and the shoreline of the dammed river.  Here we found lots of wetland birds including both jacanas, Asian Openbills, Black Ibis and lots of wildfowl including Cotton Teal, Comb Duck and Spot-billed Duck.  On the farmland Ashy-crowned Finch-larks were common and we found a superb male Pallid Harrier and a couple of Indian Coursers.  Evenings in camp were great with Collared Scops Owl calling and Indian Nightjars doing their stuff in the twilight. 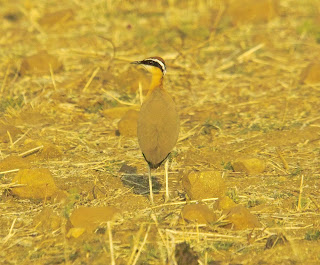 Our second base was on Bali Island in the Sunderbands in the Bay of Bengal.  Only part of our journey was by road the final two hours by boat.  It was a great experience staying here alongside villagers partaking in their sort of life.  Apart from walking around the village all other activity was by boat.  The twin threats of being attacked by Estuarine Crocodiles and Tigers restrict landing to just a few sites and their watchtowers.  Wildlife was difficult to find but rewarding when successful.  Eight species of kingfisher are found here including the large and spectacular Brown-winged Kingfisher.  Lots of waders with good numbers of Terek Sandpipers and Pacific Golden and Greater Sand Plovers.  Red Junglefowl were particularly obvious at the drinking holes too. 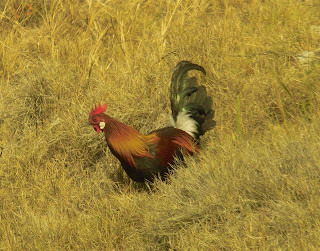 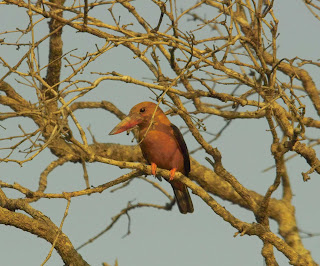 Much more was seen and having not been to India until 2010 I am now getting rather keen on the place.
Posted by Derek Moore at 14:15 1 comment:

Lots of birds and mammals and two cricket matches in the World Cup.  The latter included the incredible tie between India and England. 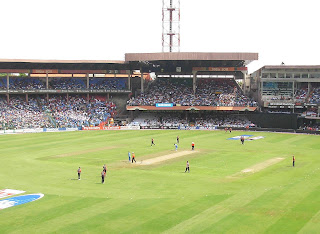 Wildlife watching was also very exciting.  We managed two Tiger sightings in Tadoba National Park but no opportunity for photographs.  We did get pictures of the massive Gaurs coming to drink.  The usual gorgeous Green Bee-eaters and Indian Rollers everywhere. 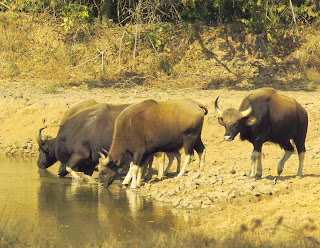 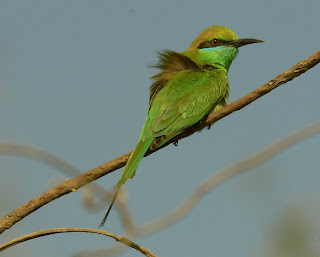 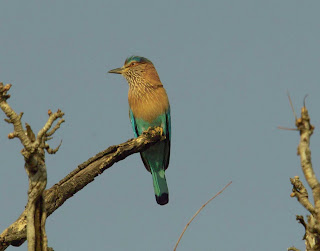 In the Sundabans we enjoyed staying in a village being looked after by local people and finding many kingfishers including the local Brown-winged Kingfisher.

I am currently in a state of anxiety as I seem to have taken 717 images on a 8GB Sandisk compact flash card which has become corrupted and so far cannot access the photos.  Any ideas anyone?

I am sure I will get it sorted.

To add a little more stress my wallet with all its contents was cut out of my pocket at the cricket match.