Coming back from Carmarthen this evening a Woodcock got up from the side of the wooded lane up to our village.
Posted by Derek Moore at 14:42 No comments:

We woke to a heavy frost but bright sunshine with absolutely no wind at all.  We decided to take a walk in the Tywi Valley starting north of the Cilsarn Bridge and taking the minor road and track towards Ro Fawr although we did not get that far. A Buzzard left a meadow to the left where it had been worming and we concentrated on passerines feeding in the meadows and the woodlands.  Nuthatches were very vocal and we noted a Treecreeper feeding high in an oak.  Large flocks of Jackdaws and Rooks were feeding on pastures and we found a small group of 12 Redwings as well.


Moving back to Cilsarn Bridge we stopped to look at the large numbers of wildfowl feeding on roadside meadows by the river.  the Whooper Swan flock has dropped to 28 and were feeding amongst 225 Greylag Geese a species which is increasing locally.  There were also 2 Canada Gees and 52 Mute Swans present.  In the river we could only find a Little Grebe, male Goosander and 3 Mallard.  A couple more Buzzards also flew over.


We took a drive around before heading back home but only added to beautiful Red Kites hunting by the roadside.
Posted by Derek Moore at 10:18 No comments:

Walking off the Turkey

Glorious sunshine and a chance for a walk around our village.  First up was the the noise of Ravens croaking away.  The birds get very active just now and move around in pairs often performing their spectacular aerial displays.  One pair flew over just calling but later we could hear the wonderful bell-like song of another bird high on the hill.

Walking on Nuthatches were being very vocal from an oak tree and over the small valley to the rear of our house a Red Kite quartered the area and a Common Buzzard sat on a dead tree seemingly also enjoying the rarity of sunshine.
Posted by Derek Moore at 10:08 No comments:

Seasons Greetings To All 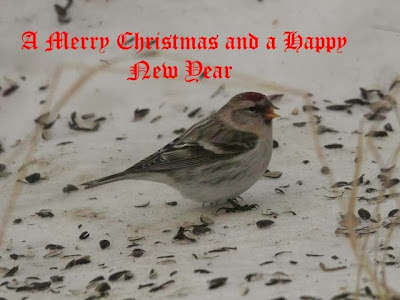 Almost A New Bird For The Garden

After filling up the bird feeders and bringing in logs for the wood burner I took a short stroll up the lane beside my house.  In the hedge just 20 yards from my property a splendid male Reed Bunting appeared and flew into a sedgy field.  Now if that birds had gone in the other direction and found my feeders it could have been species number 76 for my garden.

I must keep my eyes peeled in case it turns up.  A Willow Tit did turn up at the feeders today.
Posted by Derek Moore at 10:08 No comments:

Yesterday saw us heading north to the RSPB reserve at Ynyshir where we were to meet up with friends.  I first met Barbara and John Perry a few years ago at a raptor watch point called Snicker's Gap in Virginia, USA.  They in turn put me in touch with Ron Bennett one of my birding mates in Languedoc, France.  So having met the Perrys in USA and France we took the opportunity to meet up with them in Wales.  So together with their friend Sue Parker from North Wales we set off for a walk around the reserve.  The weather forecast was grim but we were lucky only encountering a little drizzle.

The usual woodland species such as Blue and Great Tits, Chaffinches and Nuthatch fed on the feeders at the Visitor Centre and it was not until we reached the shore area that we began to see lots of wildfowl.  Hordes of Mallards with about 50 Teal caught our eye by the first pool and a super male Stonechat cavorted on a nearby fence.  Reaching the estuary were soon watching up to 300 Barnacle Geese feeding alongside smaller numbers of Canada Geese.


Eventually we arrived at the new hide overlooking wet meadows and lagoons so we could eat our lunch.  The ere large numbers of Mallards again with a few more Teal and a Shoveler and a couple of Wigeon.  A large flock of 350 Lapwings were extremely restless and regularly flew round when a hunting Red Kite got too close.  Peering out into the gloom of the estuary we picked up a Little Egret, about a dozen Shelduck  and a couple of Curlew.  Soon the wind got up and we made our way through the woods back to the Visitor centre seeing only a few Reed Buntings on the way.  At least we were out and with the bonus of meeting friends old and new.
Posted by Derek Moore at 11:55 No comments:

And Still They Die

My hackles have been raised by the latest Wildlife Crime Report produced by the RSPB.  Apart from the well publicised loss of Hen Harriers nesting on English grouse moors there were 12 incidents of raptor persecution in Wales.  Some were birds found poisoned but the most nauseating was a case of pigeon baits being tethered close to a Peregrine's nest.  The baits had been laced with poison so when the unfortunate pigeons were taken by the Peregrines all perished.

When are these criminals going to realise that the majority of people want these beautiful raptors to thrive?  When will they stop this criminal behaviour to protect their minority interest.  I would suggest only when the penalties are made more appropriate and these perpetrators face a spell in prison.
Posted by Derek Moore at 14:42 1 comment: 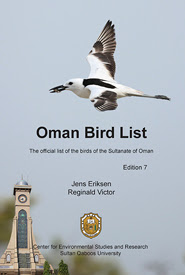 On a day of storms I was glad when the postman brought me my copy of The Oman Bird List Edition 7.  Its formal title should not put anyone off because it is not just a list but more an often updated avifauna of this superb Middle Eastern country.  I was fortunate to visit this country five times about 10 years ago. This book is the work of ace photographer Jens Eriksen and Reginald Victor.  There is a thorough introduction explaining how the book works and including a useful piece on how to submit records.  Throughout the book is lavishly illustrated by the photographs of Jens and Hanne Erikson which alone make the book worth having.  Anyone thinking of visiting Oman (I would urge you to do so) should get a copy as well as another publication by the Eriksons and Dave Seargeant called Birdwatching Guide to Oman - 2nd edition.  You will then be well equipped to see many of the bird species to be found here.  I must go back! To obtain a copy email Jens on hjoman@gmail.com

Red Kites Perk Me Up

I have been having a few problems since my operation last week but have been feeling much better today.  I took a stroll out in wonderful sunshine and was rewarded by 6 Red Kites low overhead in our lane who were later joined by a splendid cronking Raven.

Good to be out again and feeling the healing power of birds.
Posted by Derek Moore at 14:05 3 comments:

I had surgery to remove a gall bladder last Monday so I have had plenty of time to reflect on wildlife happenings this week. The Badger Cull situation in the West Country is a shambles.  The Gloucestershire cull has been stopped by having its licence revoked by Natural England because despite an extension not enough animals were killed.  We must assume that the Somerset effort will end up the same way. 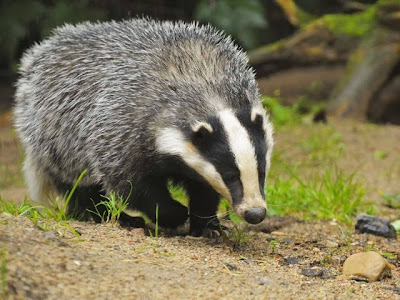 Many of us pointed out the The Krebs report warned that culling would not produce a solution to the dreadful spread of Bovine TB but politicians pressed on anxious to give their farmer/landowner supporters a crumb of comfort.  So where does this leave us? Well lots of Badgers killed anyway, a waste of public money and we are no closer to solving the Bovine TB problem.  The pig-headed attitude of DEFRA Minister Owen Paterson and his team some of whom are still claiming the Cull was a success and the blinkered NFU should step back and reflect.  Part of that reflection should include whether they should resign their positions.  Surely they have no credibility left?
Posted by Derek Moore at 03:07 No comments: