The Madness of the Slaughter of Birds in Malta 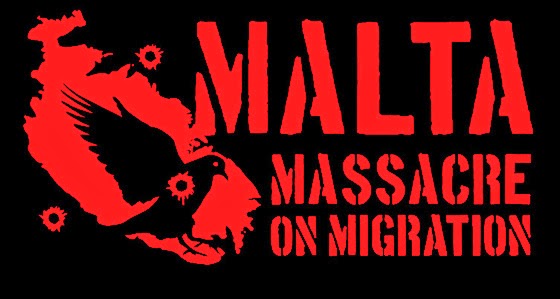 Many of you will already have picked up on the herculean efforts being made in Malta with Chris Packham and his team highlighting the disgraceful behaviour of the 10,000 hunters on this Mediterranean island.  Here birds are not shot for food merely for fun and to put stuffed into glass cases.  Nothing escapes the incessant hail of lead with Swifts, Little Bittern, Little Egret, Kestrel and Montagu's Harrier all seen killed by Chris.

All this happens with Malta being a member of the European Union where laws govern shooting and list protected species which include all of the above.  The majority of Maltese people must find it difficult to enjoy their countryside with a hail of bullets in the air daily.  Chris Packham's efforts are at least highlighting these tragic events and with effort by all of us we may be able to help. Firstly we can write to our MEPs and demand the EU enforce their own laws and stop the killing. Secondly we can make a donation to the beleaguered BIRDLIFE Malta to ensure they can get a nationwide referendum on hunting in Malta. A NO vote would put enormous pressure on their government and the EU.

Check out how to get involved and watch the emotional videos made by Chris and colleagues at www.chrispackham.co.uk


Malta is not alone in the illegal killing of birds but it is the worst example.  Cyprus is still a disgrace with liming and illegal netting and some illegal shooting still happens in Spain, Italy, France and Greece.  It is therefore time for the EU to step up to the plate and do its legal duty.

A word of caution though even the Maltese hunters are aware of the slaughter of birds of prey in the UK which also goes unpunished by our authorities and seems to be ignored by this UK Government.  We need to get our house in order as well. A number of years ago when Malta first applied for membership of the EU I was a signatory on behalf of The Wildlife Trusts in a letter also endorsed by RSPB, BirdLife etc sent to Peter Hain then a Government Minister requesting that Malta be asked to guarantee dropping their hunting laws in line with EU legislation before being granted entry.  The reply was typically lily-livered politician speak.  No said the response once they are members of the club it will be easier to get them to comply.  Well that worked then didn't it?  What do you say now Peter Hain?

By the way I am still at home awaiting chemotherapy and not feeling too bad. At least this Malta business has raised my hackles.
Posted by Derek Moore at 03:10 No comments:

Still enjoying the sunshine and home comforts and lots of goodwill messages.  Thanks everyone.

My son Jeremy sent me this picture taken in his Calgary garden yesterday. Merlin would be a good tick in any garden but with a Bohemian Waxwing as prey is something else.
Posted by Derek Moore at 01:56 4 comments:

Hello Everyone - I am still here

I know it is over a month since I last posted and have received some email about where I have been. I know I had mentioned from time to time that I have been unwell and this ended up with me being rushed to hospital on March 21st in great pain.  After scans it was revealed I had a severe blockage of the small bowel.  Surgery alleviated the pressure but showed that I have a malignant lymphoma causing the problem.  I have just returned home after a month in hospital and now wait to begin a course of chemotherapy.  I am assured I should recover OK.

What a shock and a month without birding. Glangwili Hospital in Carmarthen must be one of the few places where you are guaranteed a Red Kite from your window so that was nice.  I also managed to see 6 Sand Martins flying by as well.

I am glad to be home for a bit and look forward to home care, food and sleep. Thanks to everyone who has sent messages of encouragement. I hope to blog again soon.
Posted by Derek Moore at 02:15 4 comments: