There are dozens of books on birds published every year but only a few add real value to the ornithological literature.  Such a book is The Norfolk Cranes' Story. This attractive volume chronicles the arrival of this enigmatic species in Broadland Norfolk almost forty years ago after a presumed absence of some 400 years.

The birds landed up at Horsey and were so fortunate that they chose an estate owned and managed by John Buxton.  The next three decades of his life were spent protecting and nurturing these splendid birds until they became established as a regular breeding species.  Birders may take this species for granted when they watch them in their Norfolk haunts, but this book co -written by ex-RSPB staff member Chris Durdin describes all the heartache of chicks being lost to predators and to nature itself.  I particulary enjoyed the slight tension between John and the conservation bodies in the early days.


﻿
﻿
Their existance was kept a secret in the early years to prevent disturbance but rumours abounded including the nonsense that these pioneering Cranes were released from captivity.  If you are passionate about birds and other wildlife and their conservation you will enjoy this book.  The story of an eccentric landowner and his committment to ensuring the Cranes' survival is warming at a time when many conservation organisations have become so large and corporate that they are in danger of taking their eye off the ball.

As well as a great story this volume serves well as a reference for anybody interested in Cranes.  This species is slowly spreading in Norfolk and elsewhere.  Ironic therefore that a reintroduction programme has begun in Somerset.  With the species increasing its population in Europe and more and more birds wintering in France surely more will arrive naturally and occupy suitable habitat in the UK. 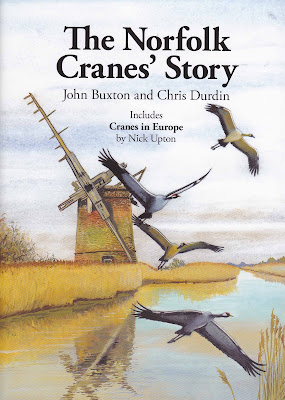 To get a copy of this book go to http://www.norfolkcranes.co.uk/
Posted by Derek Moore at 11:52