I have been out of action since last Saturday having arrived in France to find I had no internet connection.  This has obviouslt been rectified.

Prior to catching a plane from Bristol we stayed overnight with Stephen and Susanna Moss in Somerset which gave Stephen the opportunity to take us to Shapwick Heath and Ham Wall Nature Reserves on Sunday afternoon.  A brisk walk failed to produce the Great Grey Shrike but did reveal Cetti's Warbler, 2 Whooper Swans, Sparrowhawk and Woodcock.  Best of all though was witnessing the massive Starling roost which amazingly draws in hundreds of visitors to witness the aerial ballet performed by thousands of birds coming to roost. 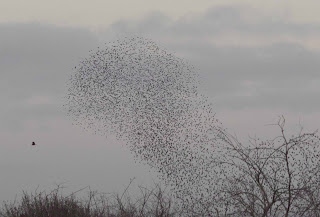 Arriving in France at Beziers Airport birding was immediate as a large group of Little Bustards flew up as the Ryanair plane taxied in.  This area is superb for these birds with several hundred being present.  I do worry though about their habit of congregating on the airfiled for their future and the aircraft. 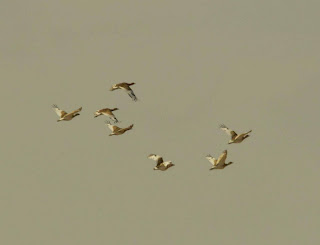 It was pleasantly warm at 16 degrees on arrival on Monday but the temperatures have now plummeted to around freezing but with clear skies and sunshine.  Not many birds seen around the house yet but a single Sardinian Warbler skulking under an olive tree and a Black Redstart roosting under our terrace were welcome.  Several Robins are obvious around the hillside which at least remind us Christmas is near.  The Robin is much more a Christmas bird here as they are only winter visitors arriving in September and leaving in early April.
Posted by Derek Moore at 02:21